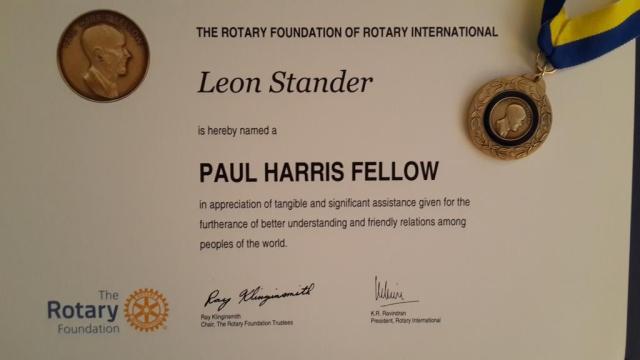 I was recently afforded the honour by the Rotary Foundation of being named a Paul Harris Fellow. My name was put forward by the Benoni Aurora Rotary club for three decades of service to children and adults with cerebral palsy, first as psychologist and for the past seventeen years as school principal.

It was wonderful to be recognized for something that was close to my heart for many years, but the reality is that at Muriel Brand School I was but part of a dedicated team of teachers, psychologists, therapists, medical and support staff. The award is really theirs and I pay tribute to them.

At the awards ceremony I became aware once again of the wonderful and selfless contribution the Rotary Foundation makes through numerous clubs in many countries. I listened in awe at the large number of significant projects run by just one club, Benoni Aurora. It was once again clear to me that Rotary International is a huge power for good throughout the world. This is made possible through the efforts of individual members who put service above self, as well as by teams united by a common vision.

Dr. Leon Stander is a sport and performance psychology consultant who specialises in psychological skills training (PST) with sportsmen and women, business executives and individuals who wish to benefit by such training. He presents group workshops, as well as individual mentoring and counselling. Current fields of interest and study are behavioural economics, sport psychology and Stoicism. Veteran sportsman, participates mainly in action shooting sports.
View all posts by Dr Leon Stander →
This entry was posted in Uncategorized. Bookmark the permalink.